Toddler Soccer is an award-winning programme, operating from Northern Ireland, that has attracted interest throughout the world. It introduces children to football and the importance of exercise from the age of two

I use unique and proven techniques to develop their game in a fun and encouraging environment. Parents and Guardians bring their kids to my coaching programmes because they believe that my approach provides a better way to nurture truly great players. 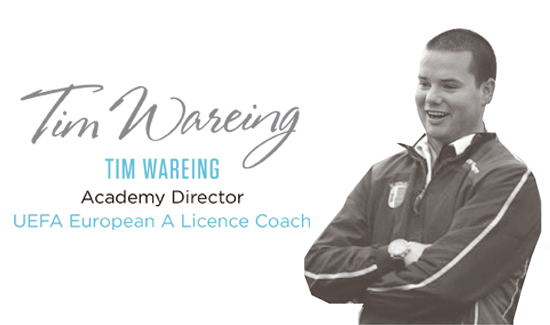 Toddler Soccer is an award-winning programme, operating from Northern Ireland, that has attracted interest throughout the world.  It introduces children to football and the importance of exercise from the age of two.

Where did it come from and just how did it all start?

Tim Wareing, UEFA European ‘A’ Licence coach, initially started with a successful coaching programme for children aged five years old and above.  At the same time that was quite unique, as most organisations and clubs throughout Northern Ireland only accepted children from six or seven years of age.  Each week Tim noticed the disappointment on the younger siblings faces when they dropped their older brother or sister off to ‘Mini Soccer’, not being able to understand why they couldn’t stay and play as well.  With this in mind, after the birth of his second child, Tim went about organising a programme specific to a toddler’s first steps in soccer.

With little content out there to develop the programme Tim decided to develop his very own programme and was the first to bring Toddler Soccer to Northern Ireland in 2006.  Assisted by a talented team of coaches, they put together ideas and adapted sessions from the popular ‘Mini Soccer’ classes.  But throwing out the boring coaching manual, his ‘Toddler Soccer’ programme has seen thousands of toddlers getting active throughout Northern Ireland and beyond.  It is wonderful to see them having fun while achieving their all important daily exercise recommendation.

The response to the ‘Toddler Soccer’ programme during the past 15 years has been phenomenal.  It has won awards and interest from all over the globe.  Tim’s book, ‘Toddler Soccer The Essential Guide To A Toddler’s First Steps In Soccer’, has sold in over 30 different countries.

The Government recommends that children should be getting at least one hour of activity each day.  In recent studies only as little as 3% of boys and 2% of girls were achieving this!  Experts have already predicted that by as early as next year 50% of children will be overweight unless they get active.  Therefore, it is essential that children learn the importance of living an active, healthy lifestyle from an early age.

We can offer this through encouraging children to take part in sport at an early age.  Toddler Soccer not only introduces toddlers to play soccer but it encourages them in an easy and fun way.

Our revolutionary program captures their imagination and acts as an opportunity to play through various games and moves, which get your child active and achieve that critical hour of activity the government suggests.

Toddler Soccer was launched over 15 years ago so that each session is simple to follow, yet captures the imagination of young children and it also sets them up with the basic soccer moves, helping them with hand-eye co-ordination, develops their motor skills, it also helps them with team work, all whilst being a fun and exciting experience.

Let’s get our children fit and active, let our sessions get your kids off the sofa, and get them investing in a healthy lifestyle.  There isn’t a better, easier and more fun way than getting involved in Toddler Soccer!

Toddler Soccer is all about soccer fun and development for all boys and girls. Toddlers from 2 to 5 years of age can enjoy age related games that will have them wanting to come back for more! We walk and teach our puppies great tricks, we drive about as Roary the Racing Car and play on a pirates ship. This is a programme that has been developed for your toddler to help introduce them to sport and football. They learn great skills on the ball but prepared in a fun way that will help toddlers have fun and be creative. The ToddlerSoccer.Org team has spent years developing the programme and tweaking with it to offer your toddler the best in fun, development and to encourage them to be creative. We encourage our coaches to throw out the coaching manual and become entertainers during each session! It is fantastic, we have 2 year olds performing drag backs and step overs but we dress it up help toddlers understand, perform and more importantly have fun! In a way we have thrown away the boring mould and had some fun ourselves

What to bring? A footy kit, tracksuit and trainers is ideal along with a bottle of juice or water. On your first session arrive 5-10 minutes early and speak to our coaches. We ask that a parent remains in the class. We are happy for mum or dad to work in with their child if this helps them settle. Our classes are set in a relaxed, fun environment. Please remember to be realistic - it can take a term for your child to settle and get used to the concept. If you need anything contact myself direct on, 07740120788.