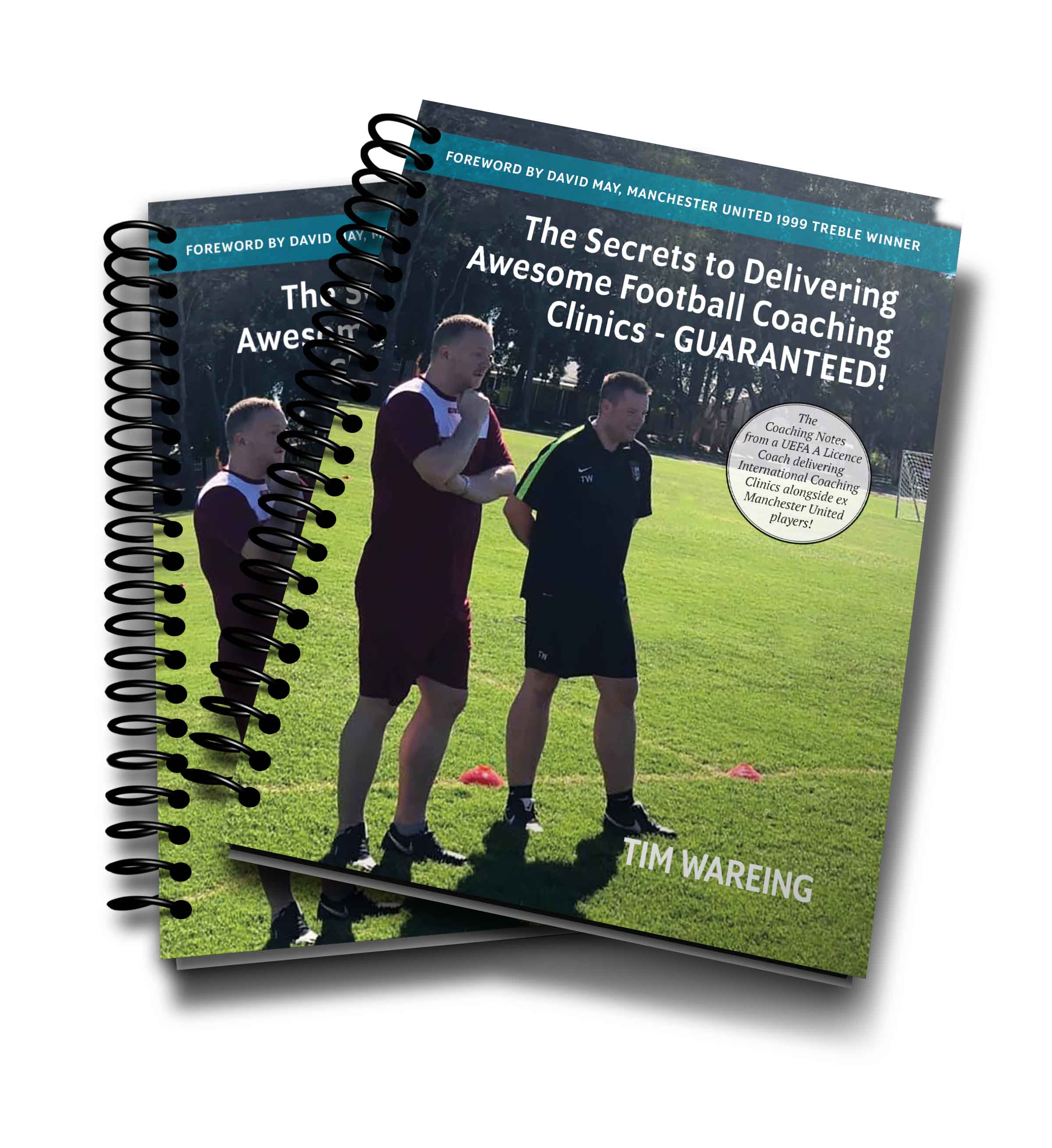 Tim Wareing has released his fourth book through his publisher titled, 'The Secrets to Delivering Awesome Football Coaching Clinics - GUARANTEED!'  Copies are available in spiral bound paperback or e-book.  You can order online or to receive your FREE 30 page taster copy contact Tim, info@twsports.org

This is the Coaching Notes from a UEFA A Licence Coach delivering International Coaching Clinics alongside ex Manchester United players!
I am sharing my coaching sessions and daily schedule that I delivered to over 100 children in Brisbane, Australia last year with David May.  David, a treble winner with Manchester United in 1999, has written the foreword in my book.  98 pages in full colour from cover to cover.
About the Book…
Tim Wareing is a highly sought-after coach.  With over 20 years coaching experience and having achieved the prestigious UEFA European ‘A’ Licence at the age of 24, his methods and coaching philosophy are known and respected worldwide.  He is sharing the secrets from his coaching notes that he delivered across successful international clinics across the globe.  Coaching alongside ex Manchester United legends Clayton Blackmore, Lee Martin and 1999 treble winner, David May.  His previous books have sold in over 30 different countries.
The Secrets to Delivering Awesome Football Coaching Clinics – GUARANTEED!’ offers you a professional and effective daily schedule to offer support for your club or organisation.  This will assist you in delivering an awesome Coaching Week for your players.
Tim’s program in Northern Ireland has over 500 children that attend every week.  This is through his Toddler and Mini Soccer classes, after school clubs, his club TW Braga and 1-on-1 students.  His coaching videos that he shares on his You Tube channel, @twsportsgroup, have received well over 1 million views.  He has launched his own Virtual Online Home Programs to reach out to a global audience.  This has propelled Tim as one of the leading youth coaches and he receives a number of requests for coach education and to deliver coaching clinics around the world.
This book has been specifically designed, so that each session is simple to follow, yet includes the coaching points that Tim offers to his players.  This is Tim’s session plan diary from his International Clinic in Brisbane that he delivered to over 100 children.  He coached with Manchester United’s 1999 Treble Winner, David May.  David made history with Manchester United as they became the first English club to win the Premier League, FA Cup and UEFA Champions League in the same season.
You can ORDER NOW…
Simply send £19.97 for the full paperback copy of the book (spiral bound finish, 98 pages cover to cover) or £10.97 for the e-book.  Send the amount via PayPal to, tim@twsports.org and include your full name, email address you wish the e-book to be sent too or your full postal address of where the book is to be posted.  As a special offer for those purchasing now we will include P&P free of charge.
Any questions you have please feel free to ask.  I look forward to receiving your order and sending a copy of my book.