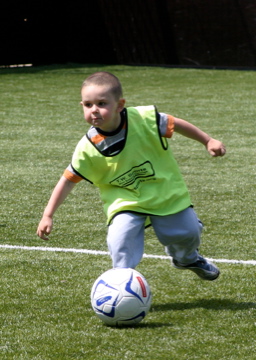 TW Braga will launch a 4v4 small sided games pilot scheme at Ormeau Park 3G from Sunday 12 May for children born 2012-2015.  It is open to all and will take place every week from 1-2pm.  At the same time we also offer 'Lads & Dads' and 'Mothers & Others' for those with older children.  Combined it offers an opportunity for EVERYONE in the family to get 'Back in the Game.'

When Tim Wareing was Academy Director at Lisburn Distillery he introduced the 4v4 format in the early 2000's.  Some of the players back then that benefitted from the concept are now playing at the top level.  Jack Chambers is at West Brom and Jordan Jenkins is with Glenavon.  Below is an extract from an article written by a good friend of Tim's, Paul Cooper.

4v4 is not a new concept; the Dutch have been playing it since the mid 1980s. The godfather of football in Holland, the great, late Rinus Michels said: “Good coaches use the basic criteria of street football for their vision of grass roots development; they realise that these elements produce a natural process which gives the most efficient training for young kids.” And there we have it, logical thinking from a coach who understands that because of modern society, street football is no more and that ‘the children’s game’ must be continued in some form if we are really serious about development.

The 4v4 pilot scheme for the U9s at Manchester United’s Academy was studied in depth by Rick Fenoglio from the Department of Exercise and Sport Science, Manchester

Metropolitan University. Rick published his results of his research in both the FA’s Insight magazine and in a major report he complied. In the report Rick highlights the underlying philosophy of the pilot study.

‘The scheme was to re-create, as much as possible, a match day environment that was more child and player-centered. This guiding concept led the developers of the scheme to reflect upon football environments where the young player was free to learn, practice and develop their football skills without being shackled by the impo- sed structures, expectations, attentions and scrutiny of significant others. The environments, which were considered to provide these qualities the most, were the playgrounds, parks, streets, back alleyways, beaches and barrios around the world - areas where the world’s greatest players first learned their skills. At this time, Manchester United FC were re-considering their approach to the development of young players and were concerned that the overall gap in skill levels between English players and European players (and, increasingly, the rest of the world) was widening.

If true, this is an interesting situation given that one of the primary aims of the initiation of Football Academies in England was the development and enhancement of technical skills. The 4 v 4 games and format of the pilot scheme were selected because it was felt that they would give players more opportunities to practice and develop their game-related skills in a less pressurized, but nonetheless challenging game format. The environment of the pilot scheme was developed from a desire to produce a more child-cen- tered and ethical learning environment.’ A 4v4 Pilot Scheme for U9 Academy Football Players – Rick Fenoglio

The study looked at game data as well as interviews with players, coaches and parents.
The results were nothing short of staggering. Compared to the 8v8 game the data was as follows for the 4v4 games:

From the interviews conducted, 80% were positive regarding the 4v4 pilot scheme and 20% were negative.
The consensus was that the children became a lot more skillful playing the 4v4 games. The games were varied which also brought out different skills. It was also not so obvious who was a defender and who was an attacker as the children became more complete footballers.

To get involved simply follow this link to register your child.  It works out at only £2.50 per week or we offer a special family pass at £5 per week so all the family can play!  For more information contact Tim Wareing via email, tim@twsports.org or phone, 07740120788.